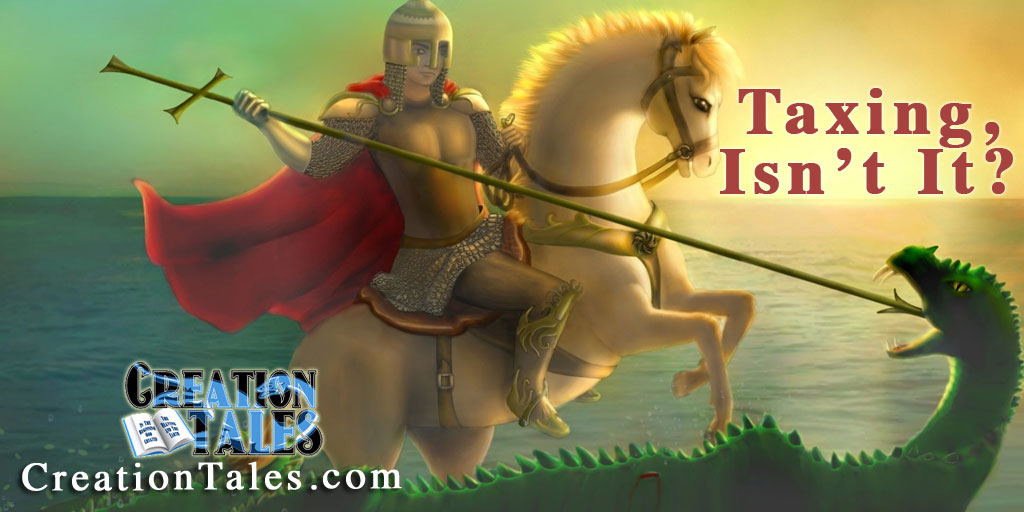 Happy tax day! Well, I suppose it's not very happy. But, maybe after reading this you'll feel a little better!

You know, obviously, that taxes have been around for a long, long time! Praise God Adam and Eve didn't have to pay any taxes, though they were supposed to avoid the one tree. I guess you could say that is a form of giving up something. But countries as far back as we remember have always had to give some kind of income to the government for their country to continue to exist.

One form of giving to your country is recorded in an old story regarding Saint George and a dragon. If you're not familiar with Saint George, here's his story. There was a town that became terrorized by a local dragon. You can call it a dinosaur too, it's a great big lizard, same thing. This great big dragon caused a lot of problems for the village. In the end, to try to keep it happy and away from the village, a villager was chosen to be given away as a sacrifice. Talk about a tax! Every month a new villager was given to the dragon to eat. Perhaps that's where we get the saying "Do not irritate dragons for you are crunchy and taste good with ketchup." (Well maybe not...)

History tells us that one day the King's daughter was chosen to be sacrificed. Since she never married, she went ahead and dressed as beautifully as she could and then marched off to give herself to the dragon. But a Roman soldier named George happened to be walking through the forest that day. (He didn't know it was tax day.) He saw the lovely princess and even mistook this day to be her wedding day because she was dressed 'to the nines'. The princess was tied to the stake and the dragon came up for his monthly snack-attack. Now George, being a Roman soldier and a smart, single guy, decided to interfere. He stayed and battled the great dragon. In was tough, but he won in the end.

Now don't go accusing me of being anti-government! I'm not trying to compare the government to the mean old dragon and how we need to battle it! I may not like taxes, but that's a subject that can be covered somewhere else. I just thought it would be fun to tell you about the story of Saint George!

George saved the country and became a hero. Eventually he became very famous and then was made a saint. Stories like his come from all over the world. They're not all the same, but they do all have dragons, dinosaurs or monsters. And what's neat is that these legends are not contained to one particular region of the world. They come from all over. Makes you wonder if people all over really had seen dragons and dinosaurs in the past. After all, they have similar themes. It would make sense that they could be true.

Interestingly, not all of the legendary dragons are the same! The Chinese dragon was long and snakelike. Marco Polo tells us that the Chinese Emperor used dragons to lead his entourage. They actually had a job position in the Chinese government titled dragon tamer. Somebody had to take care of them!

The Indians tell us about a different kind of legend, the Thunderbird. It was a great winged bird, perhaps similar to a pterodactyl that would come and steal away small children and take them to eat. Did you know there are still some reports of a pterodactyl-like creature in Papua New Guinea today? They could still exist!

And other kind of beast was Grendel, killed by Beowulf. Beowulf was a king in Viking times and he is recorded for killing the Grendel, a beast who terrorized the countryside. After that famous battle Beowulf continued his reign by battling local sea monsters. Beowulf was credited with clearing the sea-lanes between Denmark and Sweden. He killed all the sea monsters so sailors could ship and trade goods without problem.

There are enough legends that one could easily believe the earth was once populated with dragons, dinosaurs, and monsters that hunted us. But over the years man conquered them and established civilization as we know it today. We may no longer have to sacrifice ourselves, a form of tax, for the good of our brothers, but we do unfortunately have to pay a financial tax to the government. I hope this year wasn't too harsh on you! At least it's another year till we have to worry about it again! (Unless you filed for an extension.)

Want to read about more Saints and warriors who fought dragons?

Check out this awesome book on Amazon!