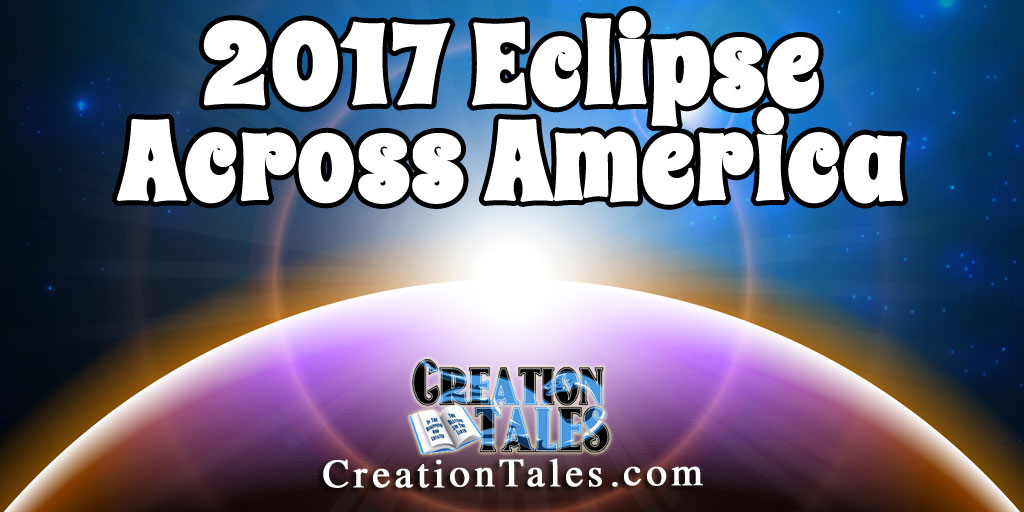 The 2017 eclipse across America is almost here! I was curious about it, and thought perhaps my family and I should take part. After all, this is a rare event. Here's some of the information I have collected!

I live in Ozark Missouri. The eclipse will start at about 11:45AM in my hometown. The best part, or the maximum eclipse, will be around 1:10 to 1:15PM. That's when we want to pull out the solar glasses. Then it goes back in to a partial eclipse for another hour and a half, until about 2:40PM.

What time does the eclipse hit your neck of the woods? Check it out at eclipse2017.org. It's loaded with great information including a google map with specific times of the eclipse for your hometown. There's also tons of stuff about what to expect. Here's a quick summary of what I gleaned.

The last total eclipse in the United States was in 1979 (and it was only in the northwest part of the country.) There was also a total eclipse in Hawaii in 1991. Any other daytime eclipse you have seen was only a partial eclipse. 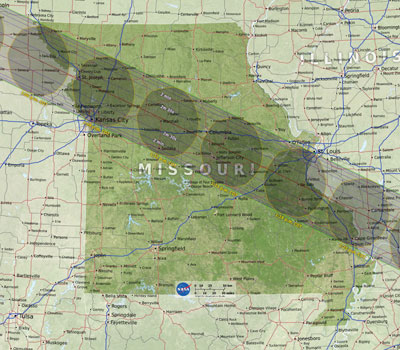 Now, I happen to live about a hundred miles from the path of the total eclipse. They also call it the "path of totality", that's where the moon completely eclipses the sun. An android app tells me that if I walk out the doors to my house I'll be able to see a 95% eclipse, but that's still not a total eclipse. Maybe that's not a big deal, but I'm thinking this seems to be a once in a lifetime type event. Why not make a day of it and take the family on a field trip?

Now I know what you're thinking. "Ben, I'm not driving no 100 miles to get that extra 5% of an eclipse.) That's fine. If you don't want to make a day of it, just wait. On rough average, there's a total eclipse that should hit your neighborhood every 380 years. No big deal. Maybe in another 380 years you'll be able to step out and see it at your house! Well, maybe not. After all, as often as American's move around, do you really think you'll still be living in the same house in 380 years? I mean, how many times have you moved in the last 10 years?

But seriously, my family and I are going to head north and check a total eclipse. Is it really worth taking the time do that? Yes.

First, my family is worth my time and money for fun things like this. Besides, doing silly and fun activities like this keeps us young and makes life interesting.

Eclipse2017.org says they're nothing like total eclipses. If you're not in the path of totality, this eclipse will just be like another partial eclipse for you. They say that it really is a big deal to see the full eclipse. I'm thinking it sounds fun, so why not?

What will happen in the full eclipse? The sun will be dark for a few minutes. I don't expect it will be like night, but probably as dark as a bad thunderstorm. And we could have some fun with it. My author friend Keith Robinson says he thinks it would be fun to shout out to strangers THE END IS NEAR, THE END IS NEAR as the darkness falls, then watch them freak out. I imagine that everybody will know what's going on though, as much attention as the eclipse is getting.

Now, something important to consider. If you're interested in getting a pair of glasses AT ALL, you need to do it now! I thought about it several days ago and thought, no biggie, I'll just order a set on Amazon Prime and get them in 2 days. Um, no. Unfortunately that's not an option. Apparently this eclipse has turned out to be a much bigger deal than manufacturer's thought it would be. The cheapest pair of glasses I saw on Amazon was $5 a pair, and none of them were with prime shipping! Also some of them seemed questionable… like the film would be wrinkled. So it seems a bit scary to put all your dice into that bet, I wouldn't like ordering a set of glasses and getting them late or getting a bad order.

Instead, I recommend going to Lowes, Caseys, Menards, Toys R Us, Walmart, or your local retailer to get them. There's a list of other dealers that sell them. I'll give you a link in a minute.

Now I purchased mine somewhere that's probably not advised, but I'm happy with it. I got mine on Craigslist. I did get a good deal. The guy was selling 5 pairs for $15.

Was it a smart purchase. I think so. I did cover my bases. You see, you have to check a few things to make sure the glasses are good. The Washington Post has a good article with lots of details. But basically you want to make sure they have the ISO logo for the International Organization for Standardization. It also helps to know who the manufacturer is. Mine on craigslist had a picture of the inside of the glasses. The manufacturer was listed on them as American Paper Optics and they're an approved manufacturer.

Now the eclipse is sneaking up on us fast. What if you're too late to buy some glasses? No problem. Check out my Pinterest board. There are some great tutorials there for making your own viewer. Plus there's lot of other activities you can do with your family. https://www.pinterest.com/creationtales/2017-solar-eclipse/

One last thing. My website is all about Creation Science. So let's talk about the science aspect of a total eclipse. Isn't it an interesting coincidence that our moon is just the right size to perfectly block out the sun during a total solar eclipse? There's a lot of factors that play into this, but the sun and the moon are in the perfect places where the moon, even though the sun is 400 times larger, can completely mask the sun out. But it's a perfect mask, the moon doesn't overlap too much. If it did, we wouldn't be able to see the glowing gasses around it.

Romans 1:20 says we are without excuse, because we can see it's obvious that God made all things.

For the invisible things of him since the creation of the world are clearly seen, being perceived through the things that are made, even his everlasting power and divinity; that they may be without excuse.

I hope you and your family are able to witness the total eclipse and have a wonderful time! 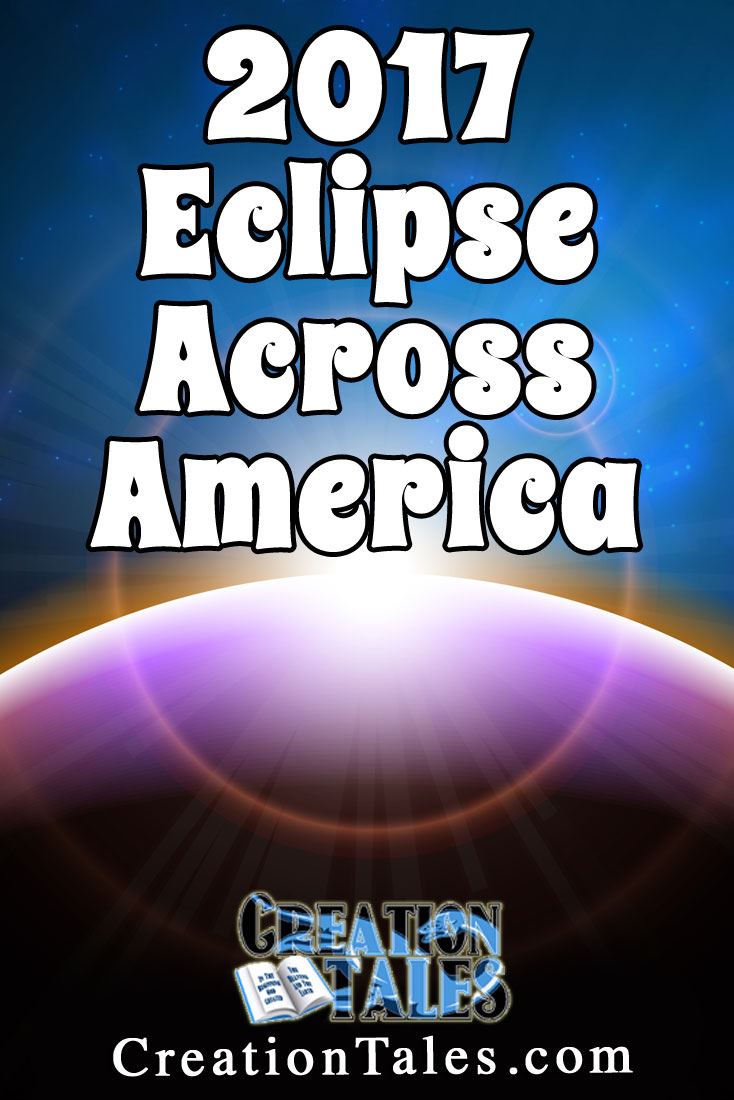 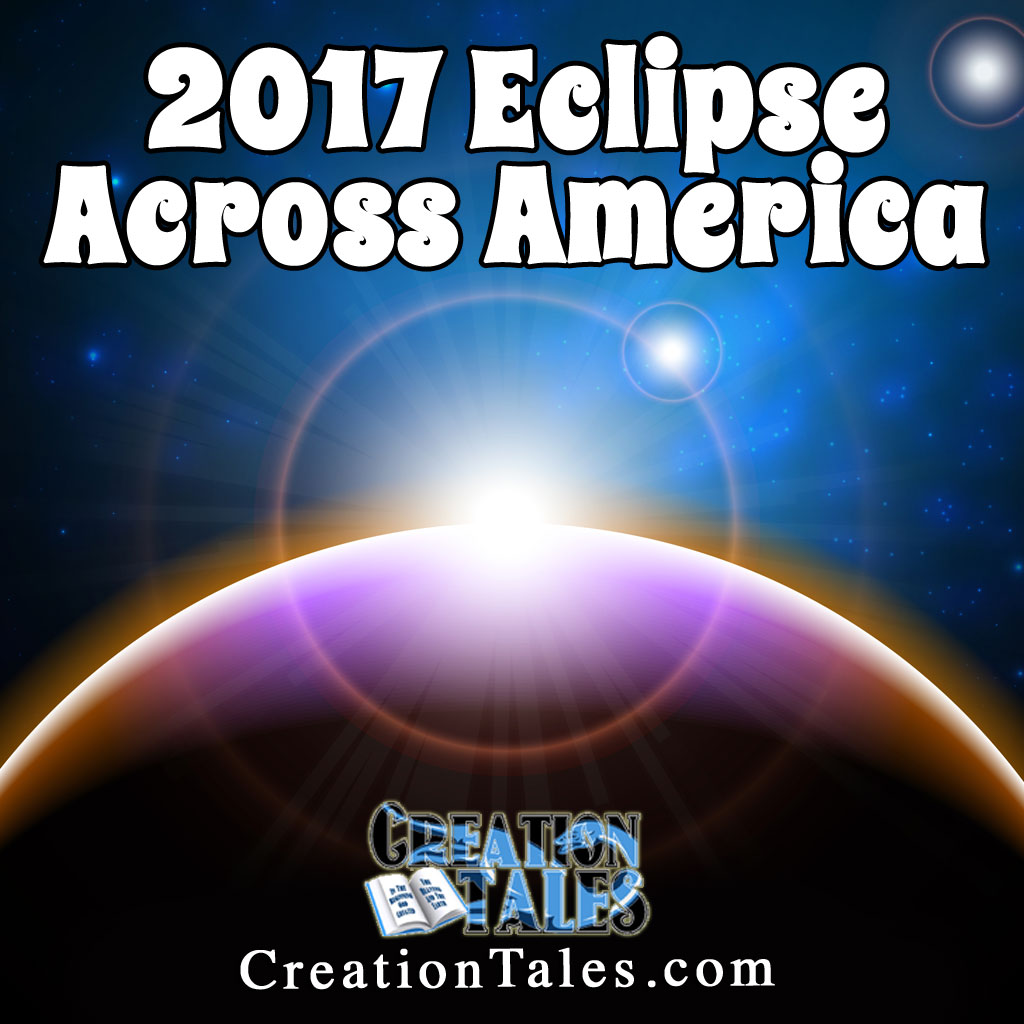