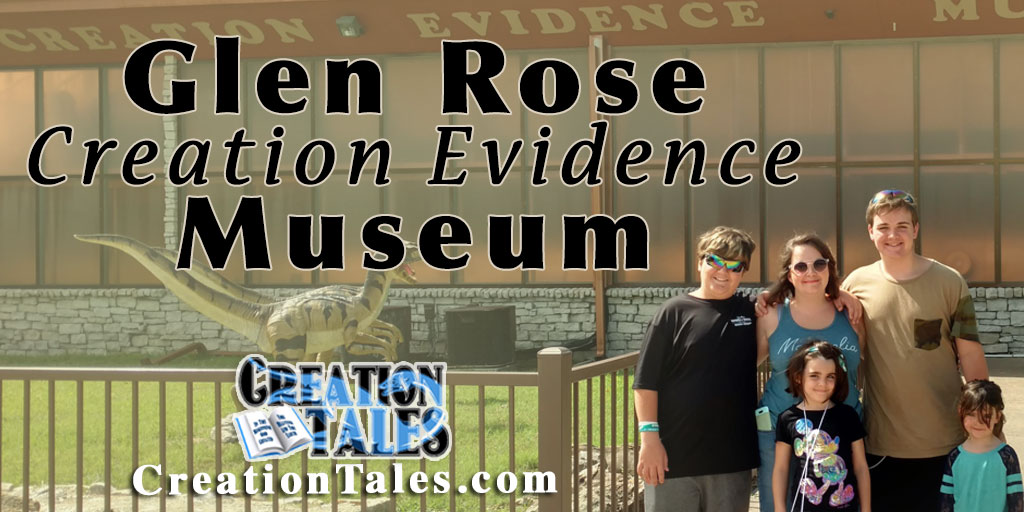 Did you know, here in the United States, there is fossilized proof that man lived during the time of the dinosaurs? If not, then sit down and get ready for some exciting information! 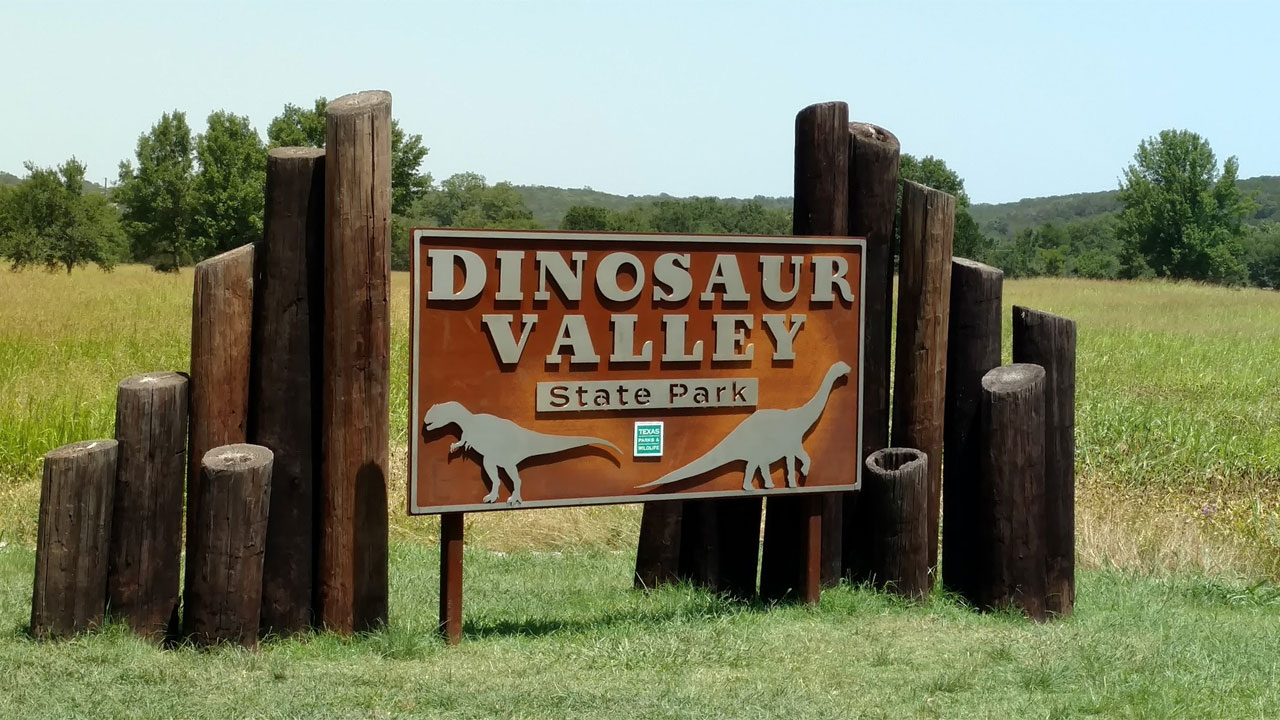 About an hour away from Chip and Joanna Gaines' Magnolia Silos in famous Waco Texas, is a little town named Glen Rose. There you'll find Dinosaur Valley State Park where there are fossilized dinosaur tracks pressed into the rocky, stone ground. There are lots of fossilized trails there.

My interest was piqued in this spectacle when I first read about it in Dennis Petersen's book, Unlocking The Mysteries Of Creation. Petersen says a few of those trails are adjacent to human trails. One includes a line of human footprints that criss-cross the dinosaur footprints. If that weren't proof enough for Creationists, there's even a dinosaur footprint with a human footprint embedded inside! Explain that to me fellow evolutionists! 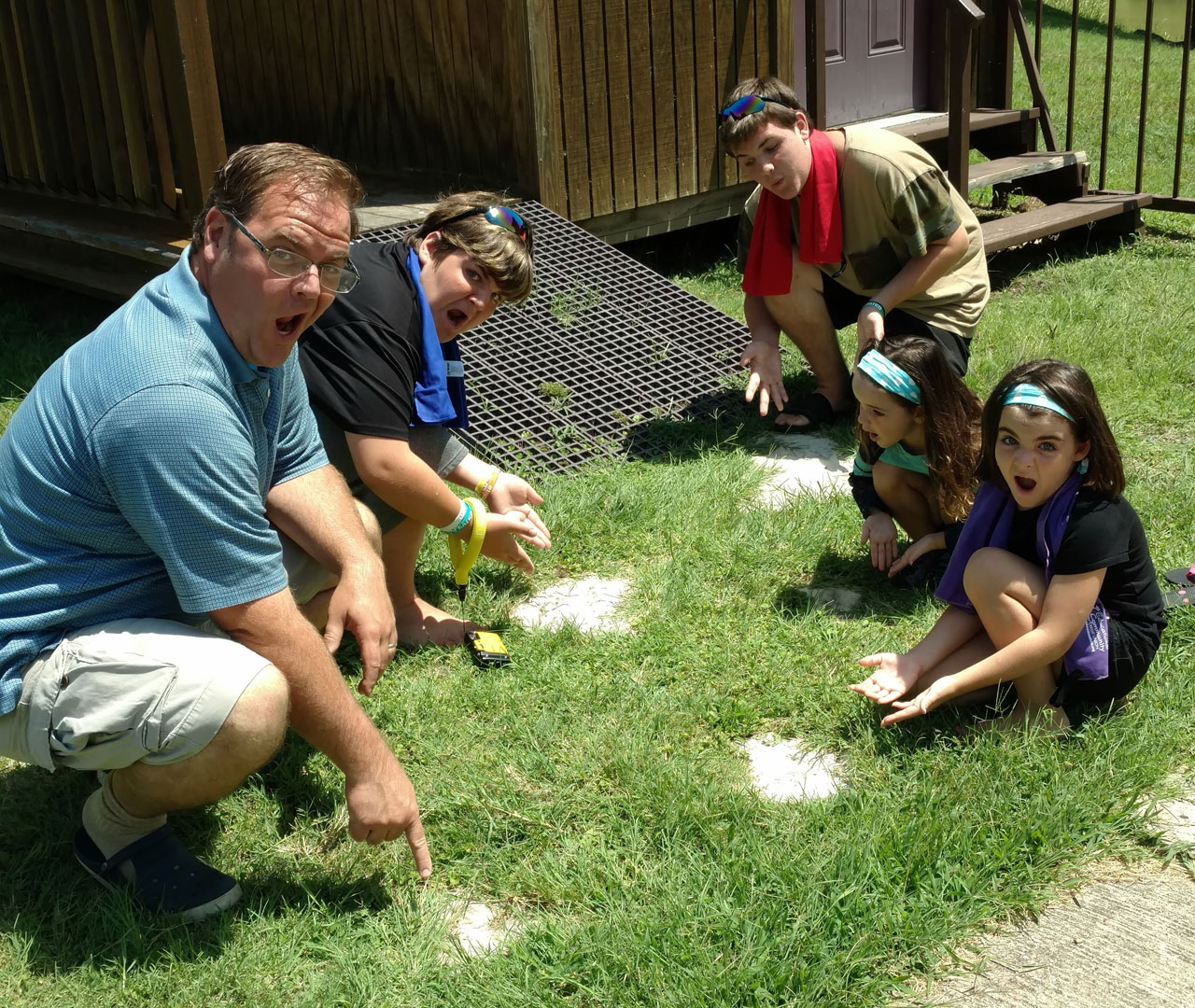 These claims have drawn lots of criticism. In fact, Petersen's book reports how one evolutionist, after hearing about the discovery at a conference, allegedly took a metal rod and broke up a human footprint in an effort to destroy it.

What's amazing is this is old news. It's just overlooked by modern, worldly scientists. Even some Biblical Creationists ignore this phenomenon because it's hard to get all the details and explain it.

Local ranchers near Glen Rose found, and began excavating, the human-looking tracks in the 1930s. In recent times, Dr. Carl Baugh, purchased land with fossilized dinosaur trails near the state park, hoping to investigate the paradox. He has since done many excavations on his property and built a Creation museum to share his findings.

During some of his excavations, Baugh discovered a fossilized trail that seemed to disappear under a layer of rock. With some hard work, he successfully lifted up the rock to expose human footprints along with dinosaur footprints. Naysayers say that Baugh created the footprints, but he did not. He exposed what was already there.

Minus 3-B Human Footprint

This photo shows a clear human footprint within a dinosaur track. (Click the picture for an enlarged version.) The print shows the placement of the human toes, and then a pull-back of the foot, leaving the total footprint impression. All of this action too place within the dinosaur track of an Acrocanthosaurus

Studies have since been done on the individual footprints to show their authenticity. Cross-sections have been studied to check the weights of the feet that made them. Findings show the fossils are authentic, not fabricated. The fossilized prints are real. 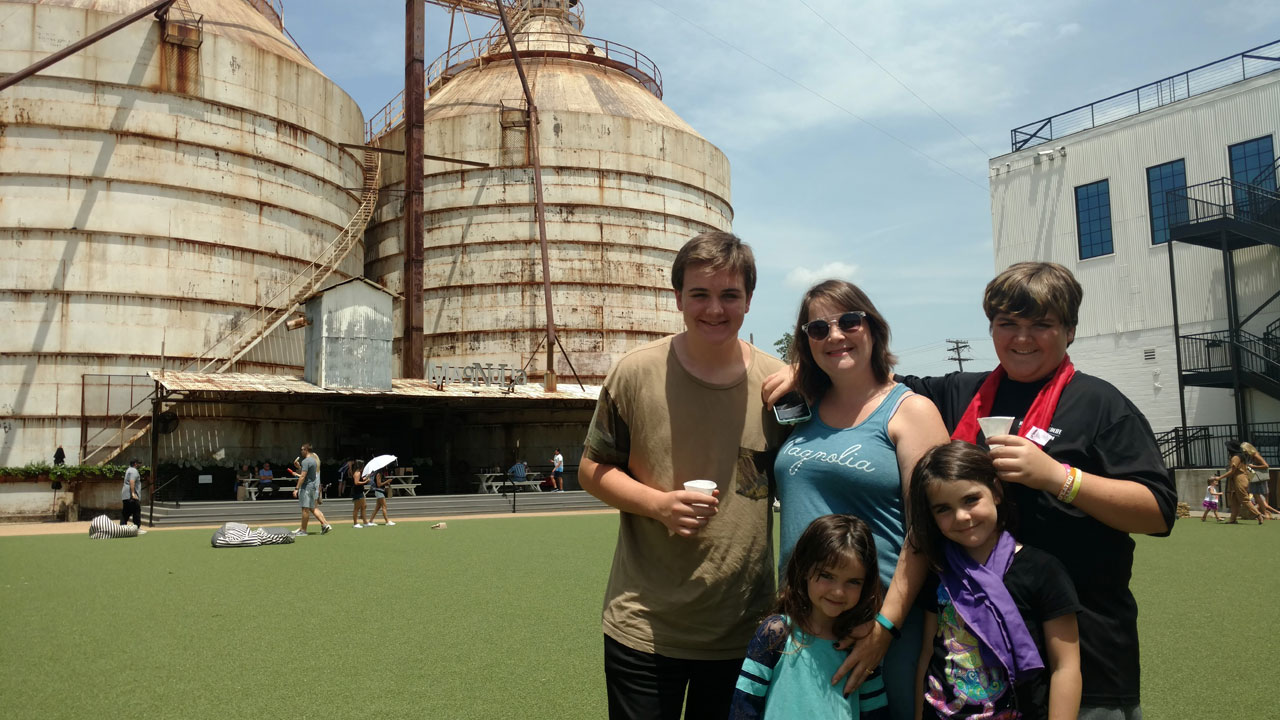 During July of 2019 my family and I visited the Glen Rose creation museum, while on our way to Galveston Texas for a family vacation. (That's how I know it's an hour away from Waco. We had to visit the Magnolia silos of course!) Our stop in Glen Rose was quick. We were trying to squeeze in a lot of sights while on our trip. Unfortunately, I didn't realize that I needed a lot more time to see the footprints.

You see, I thought I'd be able to go see the the prints on Baugh's property. I didn't realize that they are protected, because of the problems their existence has caused in the past. Tourists are not openly welcome to view these tracks. However there are seasonal excavation trips that families can take part in. One day I'd like to take my family.

I will say, a volunteer at Baugh's museum told me that there are fossilized foot prints from dinosaurs and men at the Dinosaur Valley State Park. However, the human footprints take time to find because they're off the beaten path. The volunteer also told me that park rangers may not know where they're at, or may not want to tell.

Because we ran out of time, I did not get to go find these tracks. My family went to the gates of Dinosaur Valley State Park, thinking maybe we quickly drive through and say we were there, but it cost about $20 to get in. In the long run, we decided to bypass it and headed to Waco. 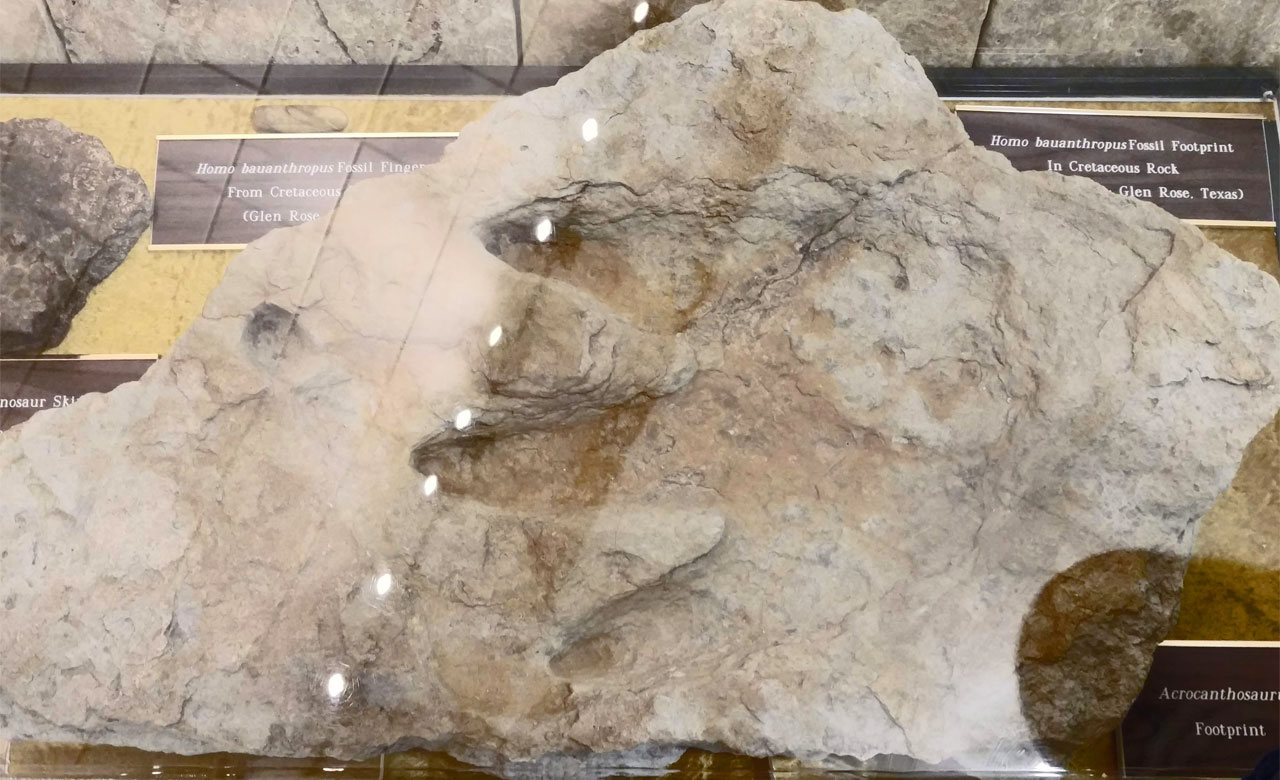 This Alvis Delk print has become the symbol of the Creation Evidence Museum. (Click the picture for an enlarged version. Sorry for the glare from the display's glass.) Alvis Delk discovered this double print in a rock slab, which the spring flood waters had dislodged and carried to the bank of White Bluff Creek, near the Paluxy River. This special double print clearly shows an 11 1/2 inch human footprint, being stepped on by an Acrocanthosaurus. All five toes, the ball, arches, and full contour of the human footprint are clearly visible. All of the features of the Acrocanthosaurus track are clear as well. Spiral CAT scan technology indicates compression density under the human footprints have been excavated and documented, by the Creation Evidence Museum team, in the vicinity of the Desk discovery.

Long story short, I didn't get to see the real life trails and criss-crossing footprints. But, my family did get to see copies and cross-sections of the prints at Baugh's Creation museum. Baugh has tons of proof there. Surprisingly, this isn't the highlight of his museum. Instead, the main attraction is the concept of Biblical Creation. 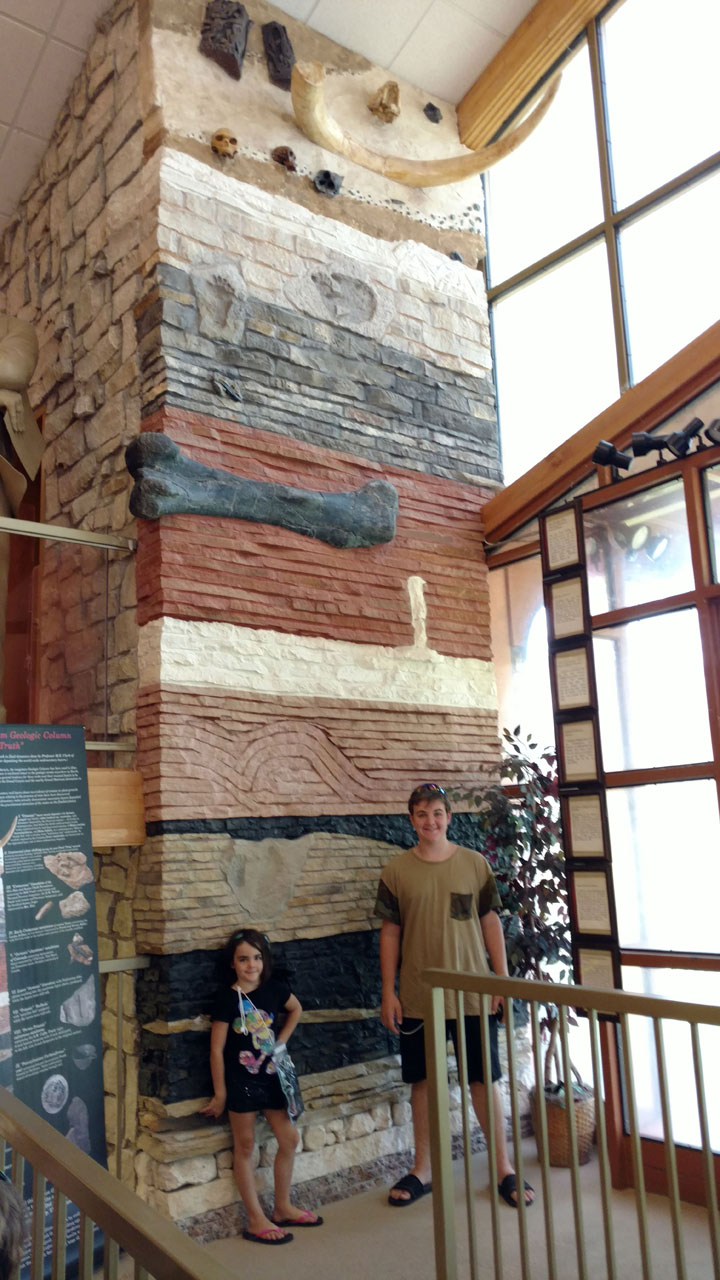 When you walk into the museum you're greeted by a life-size replica of the geological table. That is, the layers of the Earth that scientists and evolutionists believe create the ground beneath us. You know the different layers that contain different fossils and different proofs of history. It's interesting to note that nowhere on this Earth is this table of order found in its entirety. That would mean that it's still just a theory of the layers. But that's another story.

The Creation Experience Museum also has a section regarding the missing links between Homosapiens and apes. There are replicas of Lucy and different fossilized remains of animals or people that have been theorized to be missing links.

The museum also includes a very large replica of Noah's ark. (It takes up almost the entire side of the building.) You'll see antique Jewish artifacts and manuscripts. Plus there are other findings that have been dug up from the Glen Rose area: one is a fossilized human finger.

I know I keep coming back to Waco, but it seems right now that is a hot spot for tourism in our country right now. If your family is planning a trip that way, take the short trip to Glen Rose to see the Dinosaur Valley State Park and Carl Baugh's Creation Experience Museum. I think it's a trip you'll thoroughly enjoy! If you go, let me know about it in the comments below. I'd also love to hear about it if you do one of the excavations on Baugh's property! 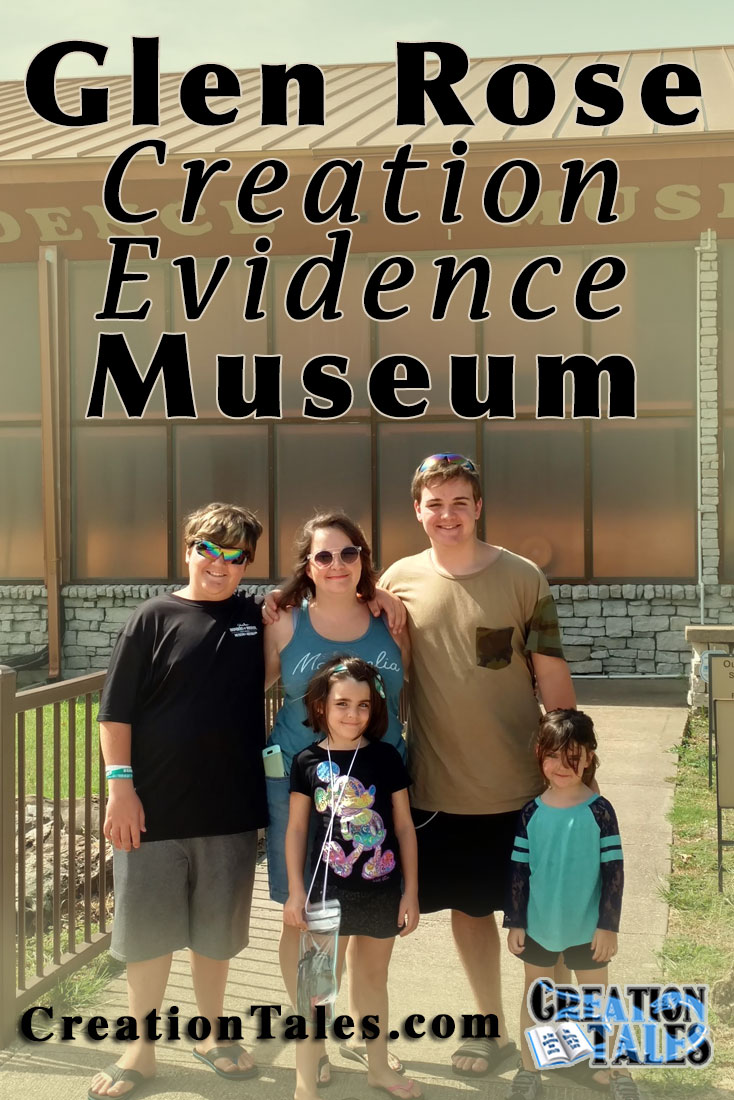 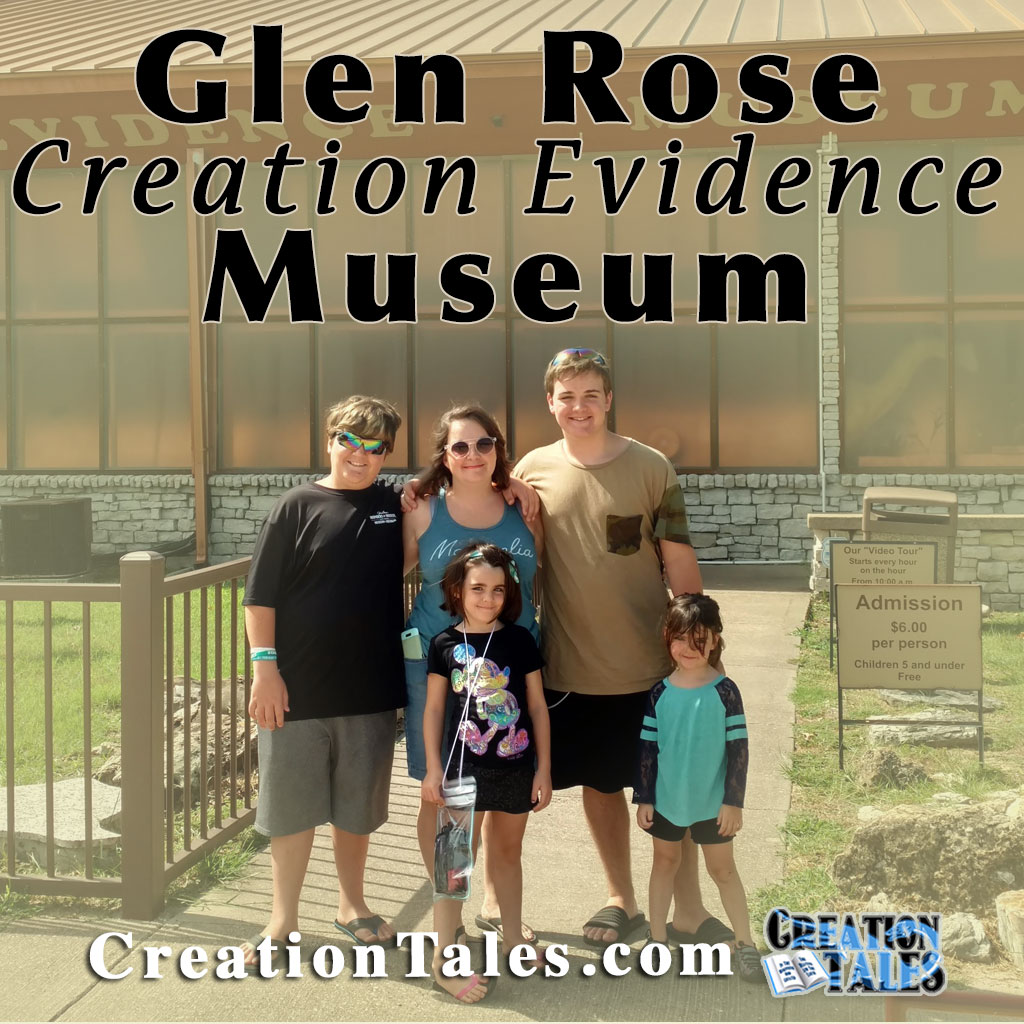